The Norwegian capital’s newest waterfront attraction was formally opening to the public on Friday, just in time for the summer holiday season. Oslo’s version of Waikiki has been in the works for 18 years.

It was back in 2003 that the ground owners, the city and the state agreed on the massive redevelopment plan for Oslo’s eastern waterfront called Bjorvika. All individual real estate developers at Bjørvika had to contribute to a fund to be managed by the harbour landowner Hav Eiendom, which was charged with developing public spaces.

First came the smaller beach and broad swimming piers known as Sørenga Sjøbad, which is packed with sun worshippers, swimmers and paddlers on warm summer days. Now the new beach is expected to be just as popular.

Located between the landmark Opera House and the new Munch museum (now simply called Munch), the beach is also close to lots of new residential and office buildings that have been sprouting up since the Opera opened in 2008. With lots of bus, tram, metro and train lines nearby, it’s easily accessible for the entire city. 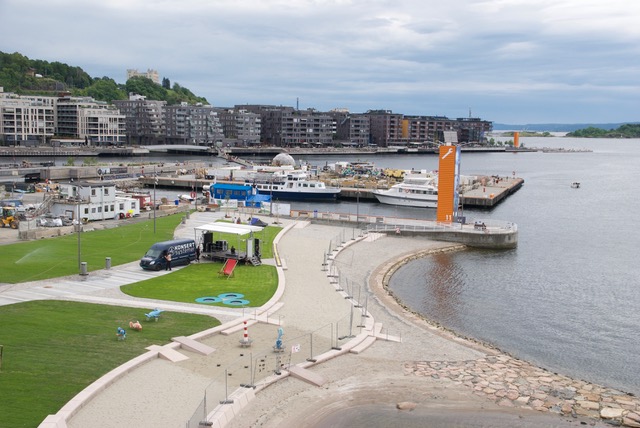 The new beach includes a sandy area closest to the Opera House and one set with large stones on the other side of a molo, a breakwater of sorts that extends into the water. There’s also a set of stone stairs extending into the water, which is shallow enough for those not proficient at swimming. “That provides good opportunities to teach people to swim,” Kalland noted, adding that swimming lessons will be offered at the beach, beginning already on Saturday. Two lifeguards will be on duty until school starts again in August.

A new park has been created behind the beach and in front of the new Munch high-rise, which is finally due to open on October 22. The process of moving Munch’s art into its new home has been going on since the spring. Surround it are lots of new housing complexes.

When the entire area has been completed, the City of Oslo will take over responsibility for both the beach and the park. Debate continues over use of the area due south of the beach known as Sukkerbiten. It’s been targeted for a new photography museum with a shop and café, while others want to keep the area open as an extension of the park.