Norway’s very own ‘House of Commons’

PHOTO FEATURE: A shabby old wooden house has risen outside Norway’s Parliament building in downtown Oslo. It’s an unusual art project that since late last month has been attracting the attention of curious passersby, some of whom venture inside as part of what artist Marianne Heske calls a “calculated provocation.” 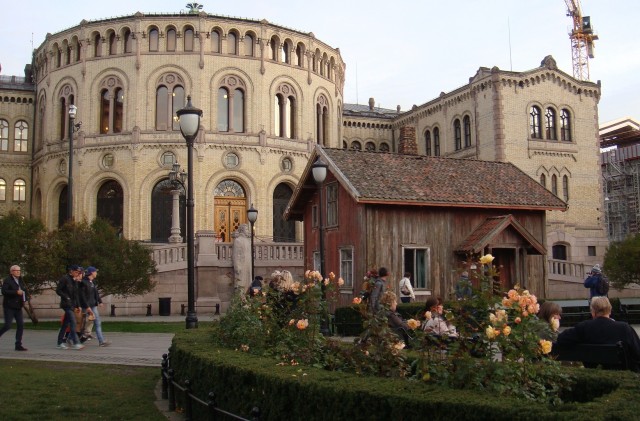 At a time when thousands of refugees are arriving in Norway, and politicians and bureaucrats are struggling to house them, Heske has mounted a reminder of the simple but sturdy homes that served generations of Norwegians before the country grew wealthy from its offshore oil. Heske, also known for erecting a 300-year-old Norwegian barn at the Pompidou Center in Paris, told newspaper Aftenposten earlier this fall that “everyone can associate and interpret this as they want.” She likes her art projects to highlight ordinary objects that otherwise don’t make it into museums. It seemed to her that the 150-year-old “House of Commons” would best be exhibited outside Norway’s Parliament (Stortinget), which also is about to celebrate its 150th anniversary. 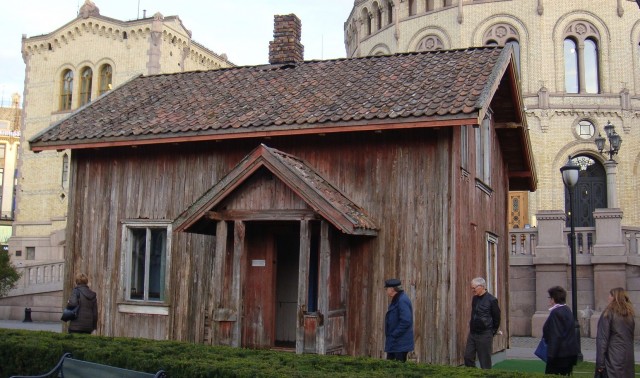 Heske, whose art also connects rural and urban aspects of society along with nature and technology, had spotted the house alongside a highway intersection in Hobøl, southeast of Oslo. It was abandoned and forlorn but had housed families until as late as 1964. She discovered that it had fallen into the ownership of the state highway department (Statens vegvesen), which planned to tear it down to make way for expansion of the E18 highway. Heske had another idea. 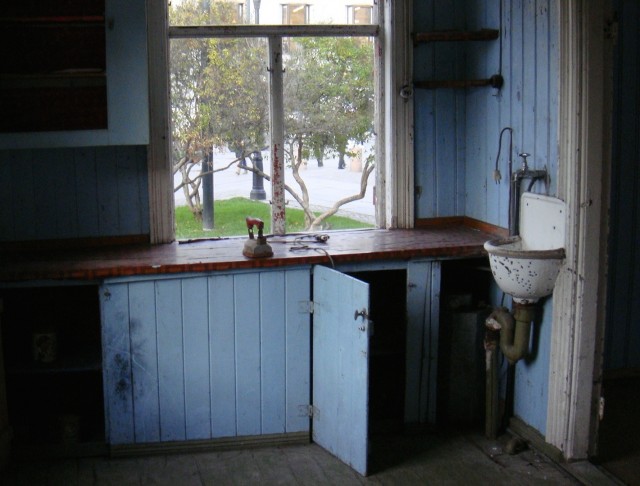 Complete with its tattered curtains and what was left of its spartan kitchen, the state cooperated with Heske’s idea of carefully taking the house apart, moving it and eventually reassembling it on the manicured lawn and historic plaza outside the Parliament building. It’s a plaza often used for demonstrations and other public gatherings but it also features rotating sculpture exhibits. The “House of Commons,” due to remain on exhibit through January, was given a green light by the presidency of the Parliament, which deemed it a good way of ushering in its own 150th-year commemoration. 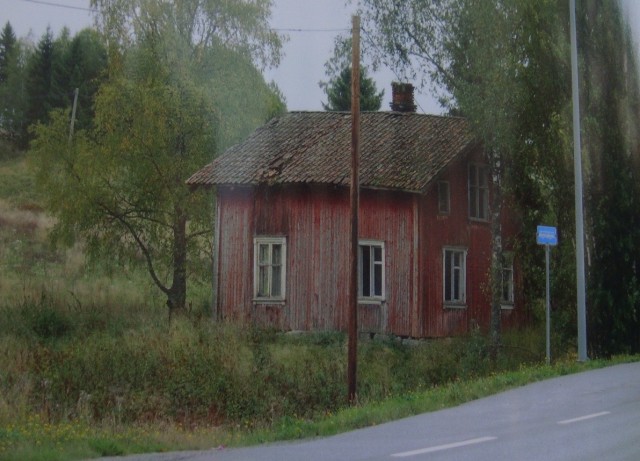 This photo accompanies the exhibit, showing how the little red wooden house stood for many decades in southeastern Norway. Heske readily admits she not only wanted to preserve the significance of such an ordinary old house, but also to place it where it would “display strong contrasts.” Its humbleness is a far cry from the modern and expensive homes now built in Norway, but a reminder of many modern-day Norwegians’ roots. The little house that had been painted red in its day stood for as long as politicians inside the Parliament have formed the laws that ultimately created Norway’s social welfare state.

Commentators have written that Heske’s “House of Commons” is a proud little house despite all its signs of age, wear and tear. It’s meant to reflect all the “invisible” and common Norwegians who go about their everyday lives without power or monuments. “‘Remember us,'” say its ghosts to the busy politicians now just next door, wrote art critic Kjetil Røed in Aftenposten. “You may not see us, but we are here. We’re keeping an eye on you.”