Stunning sunsets ‘a scream in nature’

As sunshine broke through thick morning fog over the Oslo Fjord on Tuesday, residents may be able to later witness more of the spectacular sunsets that caught lots of attention in the Norwegian capital last week. While stunning to watch, state meteorologists warned that the reason for the phenomenon isn’t as beautiful. 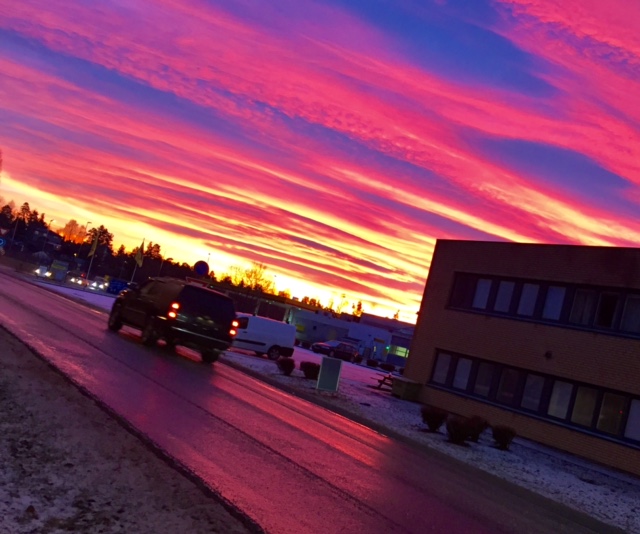 Social media has been full of photos like the one above, taken while walking home from work in Oslo late last week. The sight prompted people to stop in their tracks to admire the sunset, which also can last for a long time at this year time of year. With the sun still low in the sky, sunsets can go on for up to an hour before and after the sun dips below the horizon.

The state Meterological Institute has received many calls in recent weeks (the sunsets were also spectacular in December) from folks curious about what causes the fiery displays of red, orange, yellow and also blues and violets across the sky. They were told, reported newspaper Dagsavisen, that it’s a natural consequence of the sun breaking through clouds. Lots of westerly winds in the mountains have created cloud build-up east of the mountains, and when sunlight meets the vapor and water particles in the clouds, it creates a prism effect, full of colours.

Then comes the bad news: “In addition, air pollution has created extra amounts of particles in the sky and that can strengthen the effect,” meteorologist Eldbjørg Moxnes told Dagsavisen. Last week, air pollution levels in Oslo were so high that it led to the city banning diesel-driven vehicles in downtown areas. That same pollution enhanced the sunsets, Moxnes said.

In addition to exhaust and other emissions, she pointed out that there’s also lots of sand, salt and gravel spread over icy roads and sidewalks in the wintertime, to make less slippery and hazardous. “As long as there’s more dust kicked up into the atmosphere as a result of sanding, salting and graveling the pavement, the sunset effect will also be stronger,” Moxnes said.

It all confirms the “scream in the nature” that prompted Norwegian artist Edvard Munch to create one of the most famous paintings in the world. Munch has written himself that he was confronted with a fiery sunset while walking at Ekeberg on the east side of Oslo, then called Kristiania. “The heavens suddenly became bloody red,” he wrote, adding that it filled him angst. His friends continued walking while he stood there shaking, and felt like a scream was running through the nature.