Hundreds of thousands of Norwegians turned out all over the country on Sunday to hail freedom, democracy and solidarity at workers’ traditional May 1st parades. They hadn’t been able to gather in such large numbers since before the Corona crisis began, and those out marching had lots of issues on their minds. 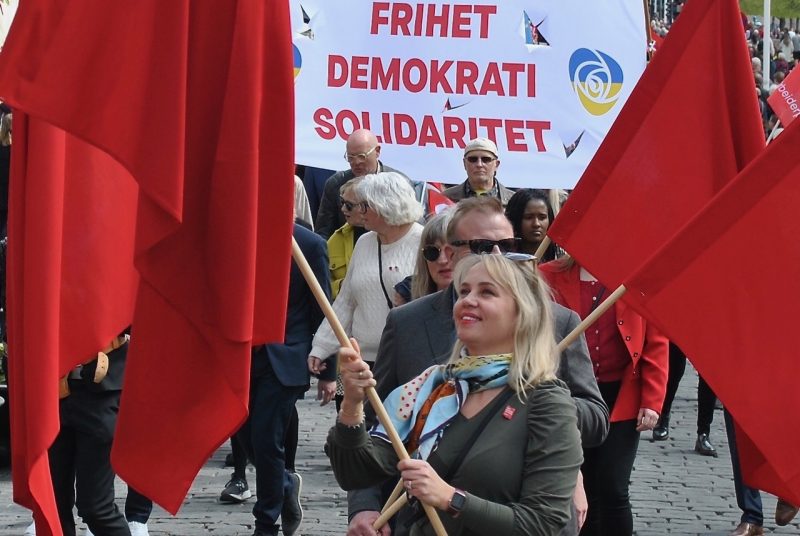 It had been a long time since the last time Norwegians could celebrate what’s officially called the “The International Workers’ Day,” and the weather cooperated as well, at least in Southern Norway. This group from the Labour Party’s Oslo chapter also made it clear that they support Ukrainians battling to defend their country from Russian invaders. 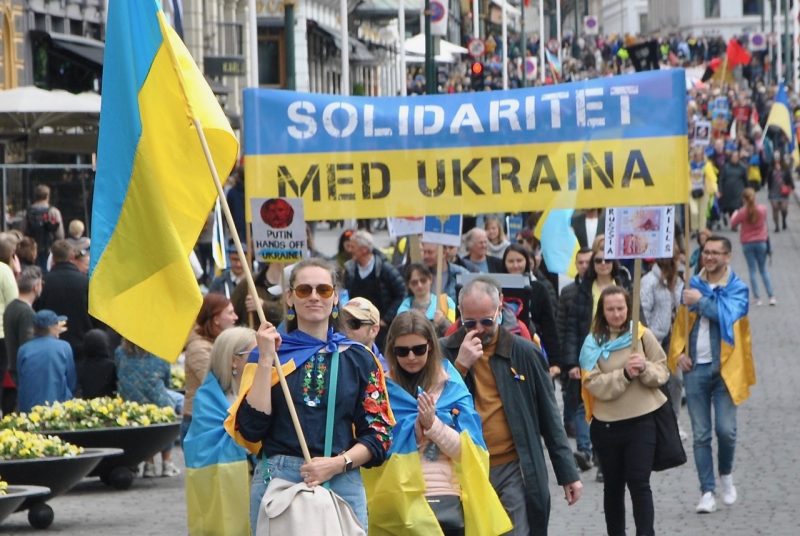 Russia’s war on Ukraine got lots of attention, with demonstrations in front of Parliament before the parade began and then lots of people marching in Oslo behind this banner, which reads “Solidarity with Ukraine.” 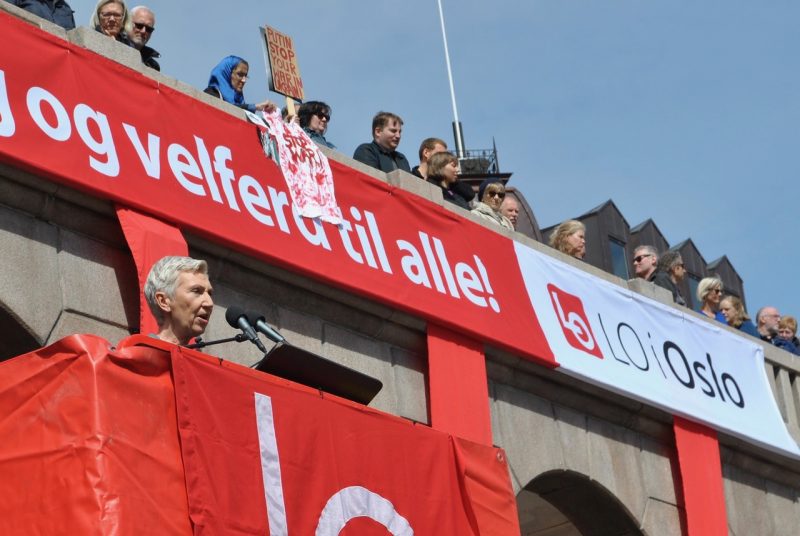 “We will always stand up for freedom,” declared the leader of Norway’s largest labour organization, LO, Peggy Hessen Følsvik. She urged Norwegians, however, not to discriminate against Russians in Norway, stressing that they can’t be held responsible for the aggression of Russian President Vladimir Putin. 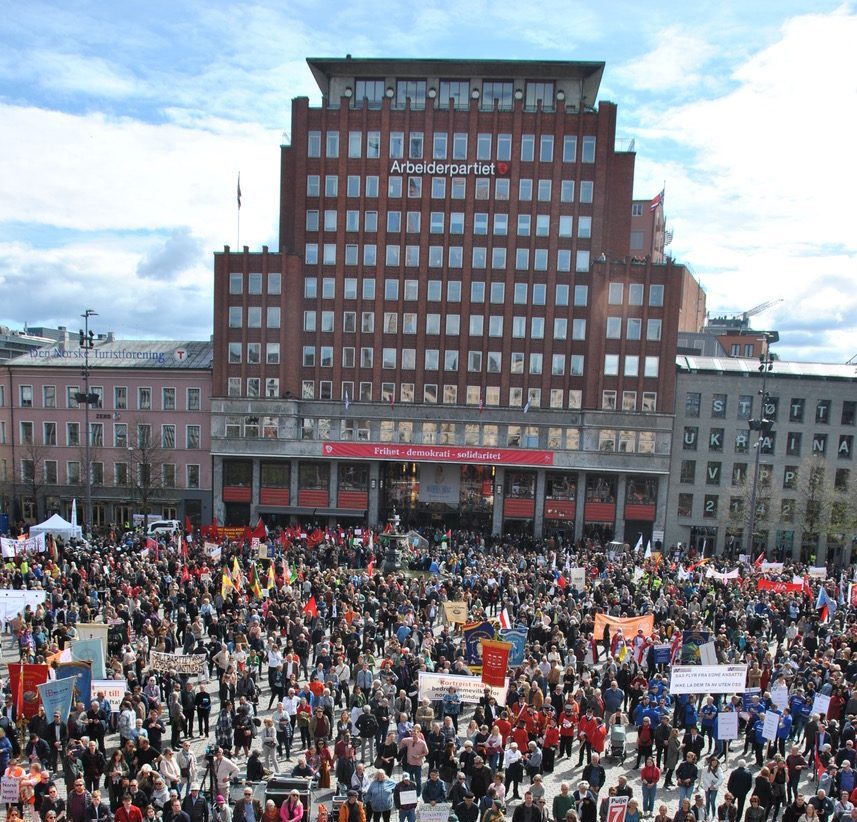 Følsvik addressed thousands gathered at Youngstorget, the large public square in Oslo, in front of the Norwegian Labour Party’s headquarters. The letters in the windows of the office building to the right also read “Support Ukraine,” with a number for making donations via a mobile phone payment service. 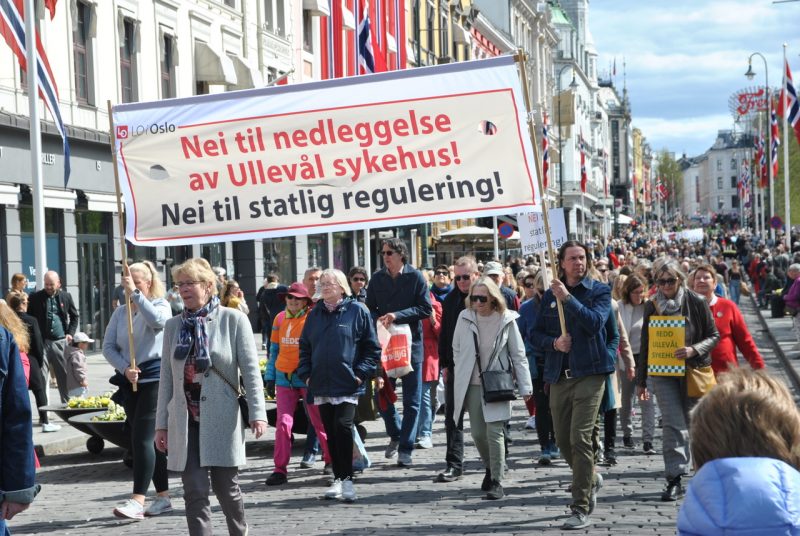 The lengthy parade that followed through the city included teachers, nurses, transport workers, electricians, firefighters and lots of groups advocating various causes, from the battle against racism to a group of pilots from Scandinavian Airlines (SAS) striving to maintain their jobs, working conditions and pay levels. There were also calls from climate activists and appeals to halt more oil exploration and production, and appeals to liberate Palestinians and end the blockade of Gaza. The largest group marched behind banners to save the country’s largest hospital in Oslo, Ullevål, from being split up and replaced by two new hospitals. The Labour-led government, however, is forcing through the controversial project. 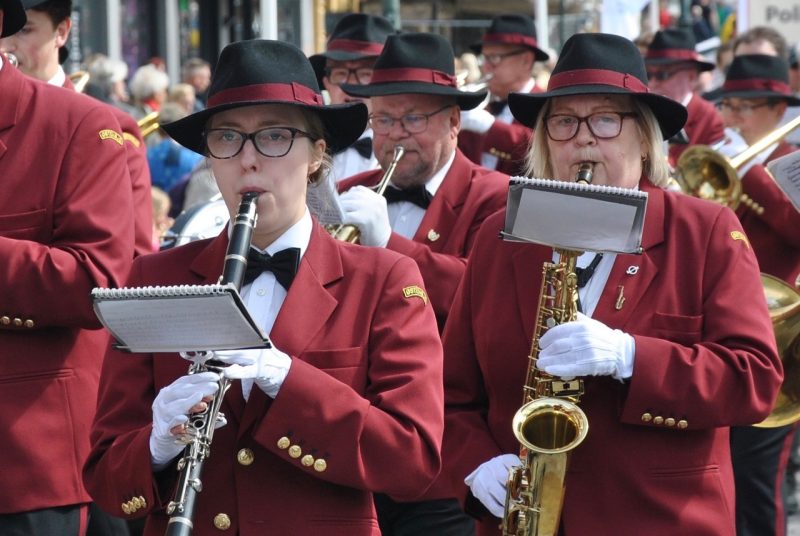 No parade is complete without marching bands, and there were plenty of them on hand, too, also around the country. Labour Party leader Jonas Gahr Støre delivered his first May Day speech as prime minister in Larvik, where he stressed a need to keep bringing down Norway’s already low unemployment rate. He also visited Drammen, Skien and Asker, while other top politicians fanned out around the country. Russia’s invasion of Ukraine was a major topic, with Foreign Minister Anniken Huitfeldt vowing to her audience in Hommelvik that Norway would continue to take in Ukrainian refugees and support the Ukrainian government.