‘Gratulerer,’ and eat some cake

PHOTO FEATURE: Politicians poured out of Norway’s Parliament on Tuesday and into brilliant sunshine in Oslo, to celebrate the 100th anniversary of full voting rights for women. Prime Minister Jens Stoltenberg and other party and parliamentary leaders handed out cake and congratulations (“Gratulerer!”) at one of many special events held all over the country. 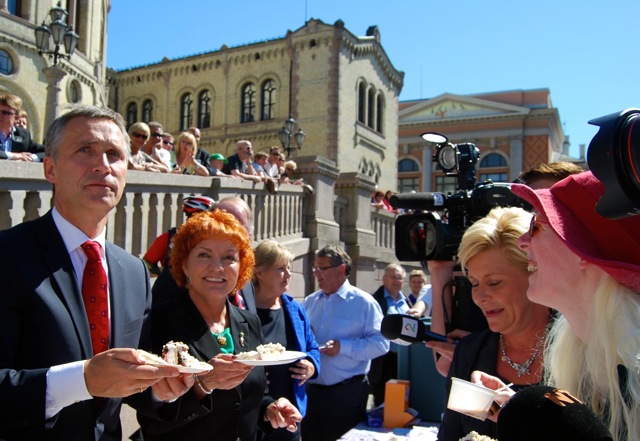 Stoltenberg made a short speech before three hours of outdoor entertainment began on the plaza in front of the Parliament known as Eidsvoldsplass, and then he joined other party leaders just below the Parliament’s main entrance in passing out cake to anyone who wanted it. On his left is Marit Nybakk, a veteran Member of Parliament for Labour, and at right is Progress Party leader Siv Jensen, who helped pass out cake that Stoltenberg cut. In the background, Conservative Party leader Erna Solberg and her party colleague, former Finance Minister Per-Kristian Foss. 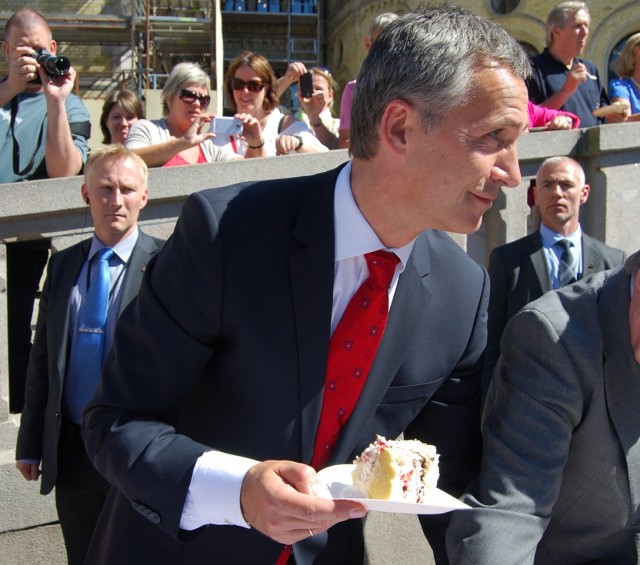 It all made for very close contact between government leaders and the public, but security guards were standing right behind Stoltenberg. 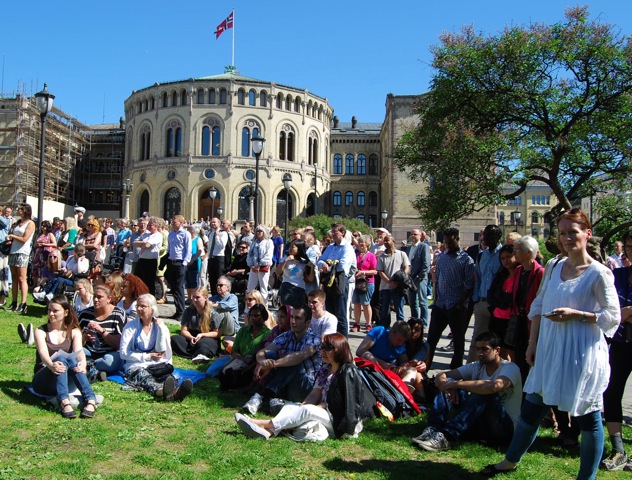 Lots of folks turned out for the state-sponsored party Tuesday afternoon, which Stoltenberg called “the most important birthday celebration of the year.” It was in the Parliament building pictured here that legislators 100 years ago finally approved full voting rights for women on June 11, 1913. 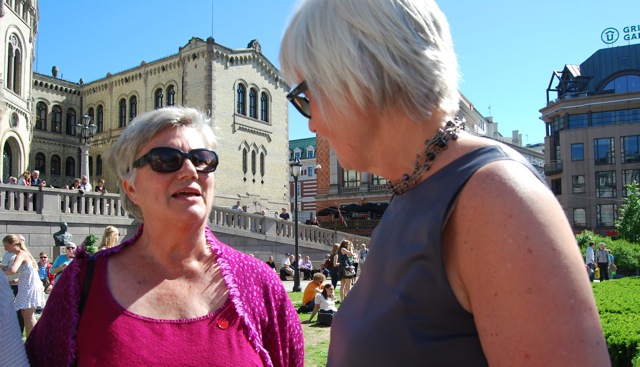 Among those speaking at the celebration, and helping organize it, was Kirsti Kolle Grøndahl (left), who was Norway’s first woman to become president of the Parliament, in 1993. She’s speaking here with Valgerd Svarstad Haugland, who was the first woman to be elected leader of the Christian Democrats party in1995. 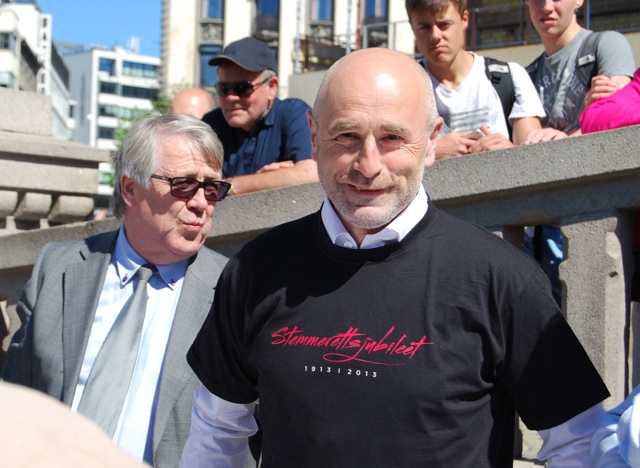 Today’s Stortingspresident (President of the Parliament), Dag Terje Andersen, donned a special T-shirt for the day when he also helped pass out cake. The back of his shirt identified him simply as “CREW.” 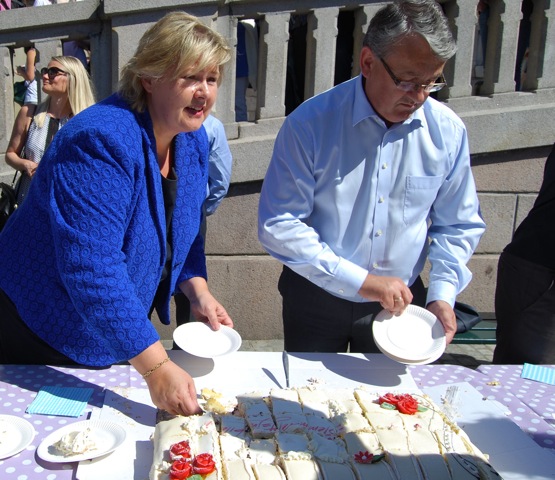 Conservative Party leader Erna Solberg and party veteran Per-Kristian Foss were also busy passing out cake. They were among those urging everyone to exercise their voting rights at the upcoming national elections on September 9, when Solberg is widely favoured to beat Stoltenberg for the prime minister’s post. 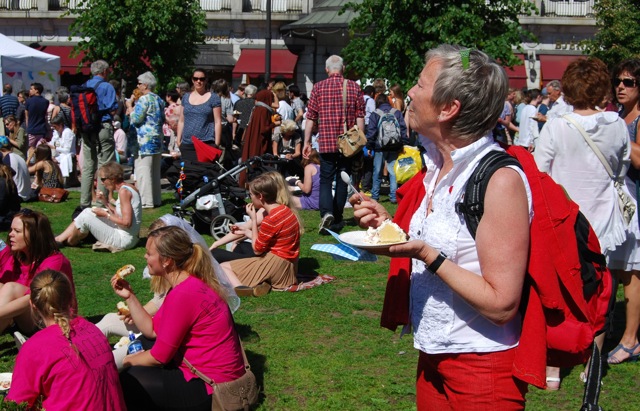 The organizers handed out coffee and juice along with the cake, typical birthday party fare that also was enjoyed at other celebrations around the country. Crown Prince Haakon, for example, spent the day in the northern city of Steinkjer, where a conference on voting rights was being held. In Oslo, there was also a celebration of voting rights outside City Hall and a parade, along with appearances by Norway’s first female prime minister, Gro Harlem Brundtland, and skiing stars Marit Bjørgen and Therese Johaug. 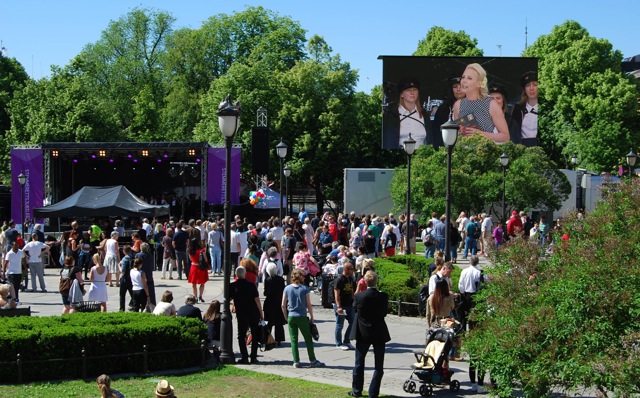 When the cake was gone, the audience could listen to a string of well-known Norwegian performers including Mari Boine and Big Bang. The celebration was hosted by Norwegian comedienne Linn Skåber.

Norway’s voting rights movement was launched in 1884, with the formation of Norsk Kvinnesaksforening (a suffrage organization). In 1886, a proposal was made to give women the vote but it was debated for years and defeated in 1890 by a vote of 70-44.  It wasn’t until 1898 that all men in Norway, not just those owning property, were allowed to to vote. In 1907 women won limited rights to vote in parliamentary elections and, in 1910, in local elections. Full voting rights for all women were finally approved by a unanimous Parliament in 1913. Discussion on the floor of Parliament on Tuesday included admonishments that Norway, one of the most egalitarian countries in the world, still lacks full gender equality, with women’s average salaries lagging men’s by around 15 percent and women holding the vast majority of part-time positions. Most local mayors are also men in Norway, but women leaders otherwise are well-represented in national politics, labour organizations and business.

TEXT AND ALL PHOTOS: Nina Berglund